It’s likely pretty obvious at this point, but I enjoy eating at – and reviewing – sushi restaurants. It’s not just because of the food – though it is my favourite of course – but the entire experience; each one is unique in its own way, so my anticipation prior to a meal is usually high. And yet, for some reason, my hopes for Tanoshi weren’t that high. I had heard great things of course, but maybe it was the low price (unusually low for omakase), the lack of a well-known star sushi chef behind the counter, or even the location (in a family-heavy area of the upper east side) – my inner sushi soul just wasn’t alive. It should have been.
​
For a long time, Tanoshi maintained one of the most ridiculous reservation systems that I have ever heard of. Every day, a sign-up sheet was posted outside the restaurant for each of the three seatings. Simple enough, except for the fact that Tanoshi is located at 73rd and York Avenue – basically in the east river next to Manhattan. In all likelihood, the majority of people who can afford the price tag at Tanoshi were likely working during weekdays, and therefore unable to make the trek to make reservations. So Tanoshi changed their policy, allowing online reservations (with credit cards).

Any ill-will about the reservation process quickly evaporated as soon as I entered Tanoshi. Sure it’s small. But it’s also beautifully decorated, and authentic to the type of sushi restaurant that you might see in Japan. Twelve seats make up all of Tanoshi, and they are placed (with just enough space) around the “L” shaped sushi bar.

So it goes without saying, but The Atmosphere is phenomenal. The walls for instance, are not just covered with art, but information. Maps of both Japan and the world hang behind the sushi bar (see right), and have actually been labeled with the locations of where each of the items on that day’s menu were sourced from. It’s a crazy cool and unique touch, except for the fact that I spent most of my meal focused on the maps, much to my girlfriend’s chagrin.

​The food was a complete revelation. Tanoshi prepares their fish edo (or edomae) style, which is just a fancy way of describing the way the fish is prepared prior to serving. Before there was refrigeration, in order to maintain freshness, fish was often cured in vinegar/salt prior to serving with rice. As a result, when you eat at Tanoshi, I would highly recommend enjoying your food EXACTLY as it’s served – that means no soy sauce added.

The menu is omakase only, for what is an extremely reasonable $80. My favourite piece of nigiri was actually the Black Sable (pictured right), which is a bit of an unusual item for omakase (the same as any fish that isn’t found in Japanese waters). I also was pleasantly surprised by the albacore tuna with caviar. As devoted readers will know, I’m not typically a fan of albacore tuna, as it’s the same fish that comes out of a tin can at the grocery store. Kudos to Tanoshi for making it work.

While I was concerned that the cheap price tag might indicate a let down, in actuality it just indicated a smaller omakase (and one without any toro). Thankfully, Tanoshi has an extremely reasonable a la carte menu that has unique nigiri and other appetizers. A nice touch is that all the nigiri fell between $6 and $10 per piece, and none of the items on the a la carte menu featured on the omakase. I would recommend taking advantage of it.

Or you can just stare at a picture of crab brains nigiri (pictured right). It tasted similar to the green umami that comes out of a lobster, and has all the benefit of completely grossing out anyone eating with you.

I’ve written plenty of words on Tanoshi, and haven’t even touched on the rice, which I thought was excellent. It was served properly (at body temperature) and had the perfect ratio to the fish. I would put it against the rice from any sushi restaurant in New York.

Tanoshi is a must-try, for sushi snobs and rookies alike. Definite recommend​. 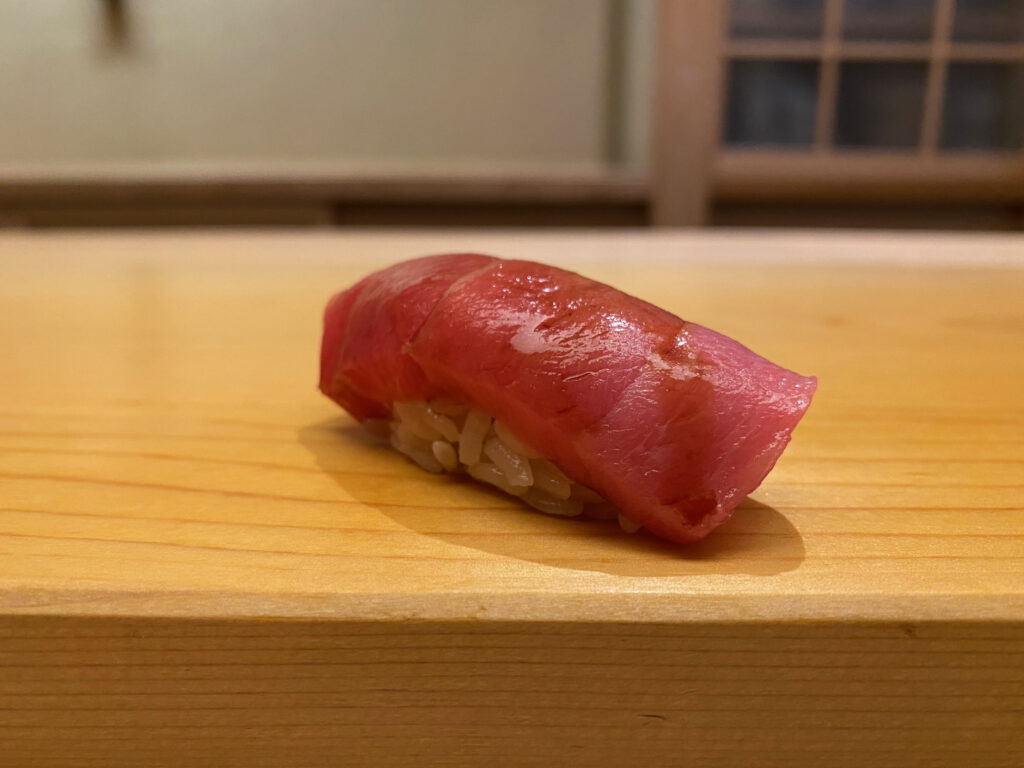