The flagship of the New York City sushi scene

Eight years ago this month, I wrote my first blog for this labour of love website. The subject, was Ichimura at Brushstroke, a recently opened “shop within a shop” at David Bouley’s famous TriBeCa restaurant. Already a semi-well known figure in the sushi world, a 3 star review from legendary New York Times critic Pete Wells had rocketed Eiji Ichimura to superstar status in New York City. My visit in late 2012, soon after moving to the city, in many ways motivated me to learn more about sushi and begin this passion project. 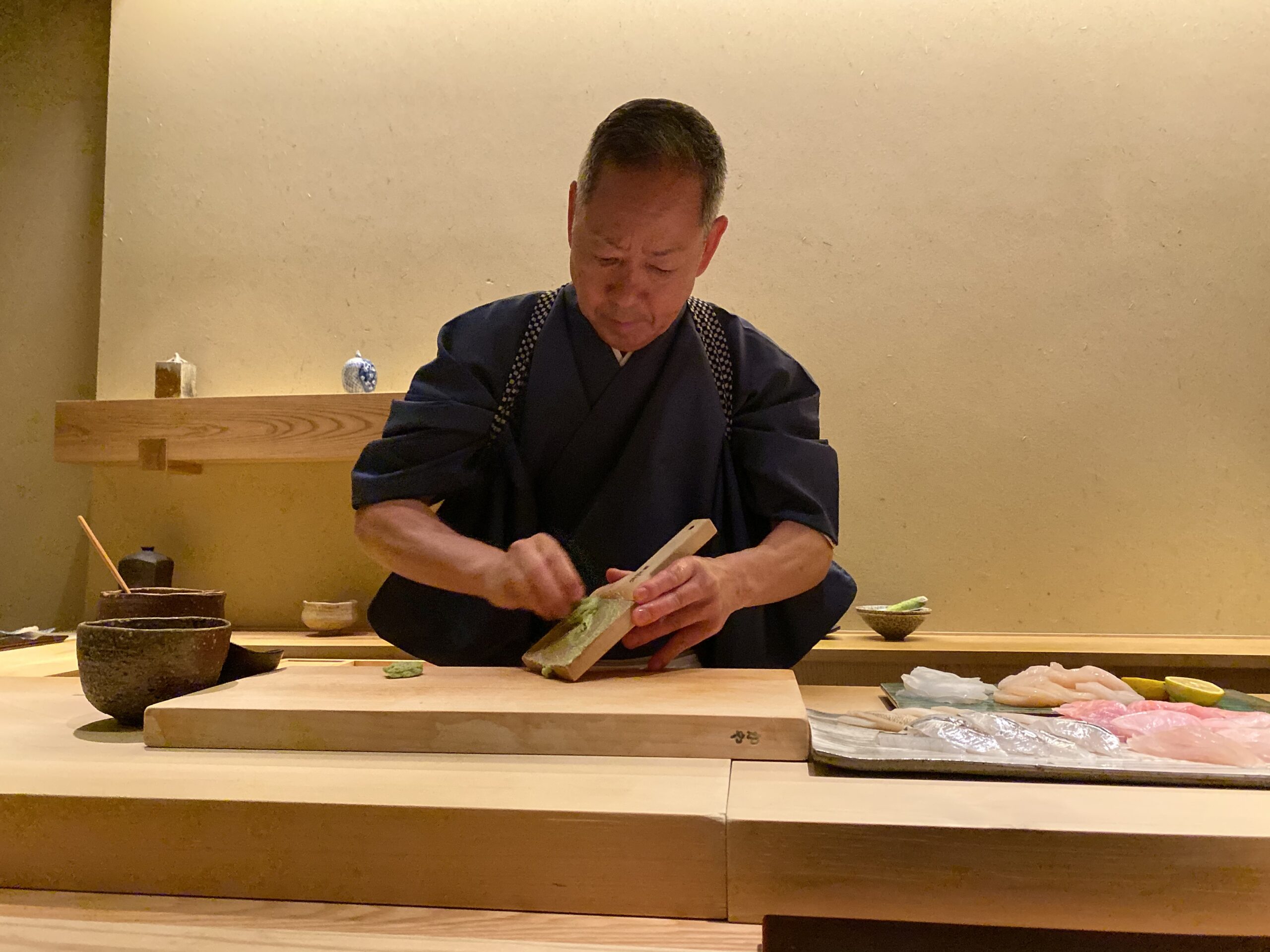 The legend himself, Eiji Ichimura

Since then, much has changed. Ichimura himself moved on, first for a brief, obfuscated stop at the eponymously named Ichimura (now Shoji), and then to Ichimura at Uchu. Brushstroke has sat empty for years (anyone want to lease a restaurant?). Pete Wells has continued to critique, still excellent, though he may (or may not?) have forgotten to cite my review of Uogashi Midtown when writing in his own (that’s okay Pete, I know you’re reading and forgive you). And I’ve finished 98 more blogs, which works out to an appallingly, horrifically, embarrassingly slow rate of like 1.18 blogs per month.

So for my 100th post, I’ve come full circle (or maybe full oval), to Ichimura at Uchu. The price has risen, and both the landscape inside and outside (more later) the venue has changed, but Ichimura-san is still as gracious and technical as ever.

Thanks for helping grow this site and educated sushi culture, and here’s to many more. Now let’s walk through a $300 omakase (my commentary is free). 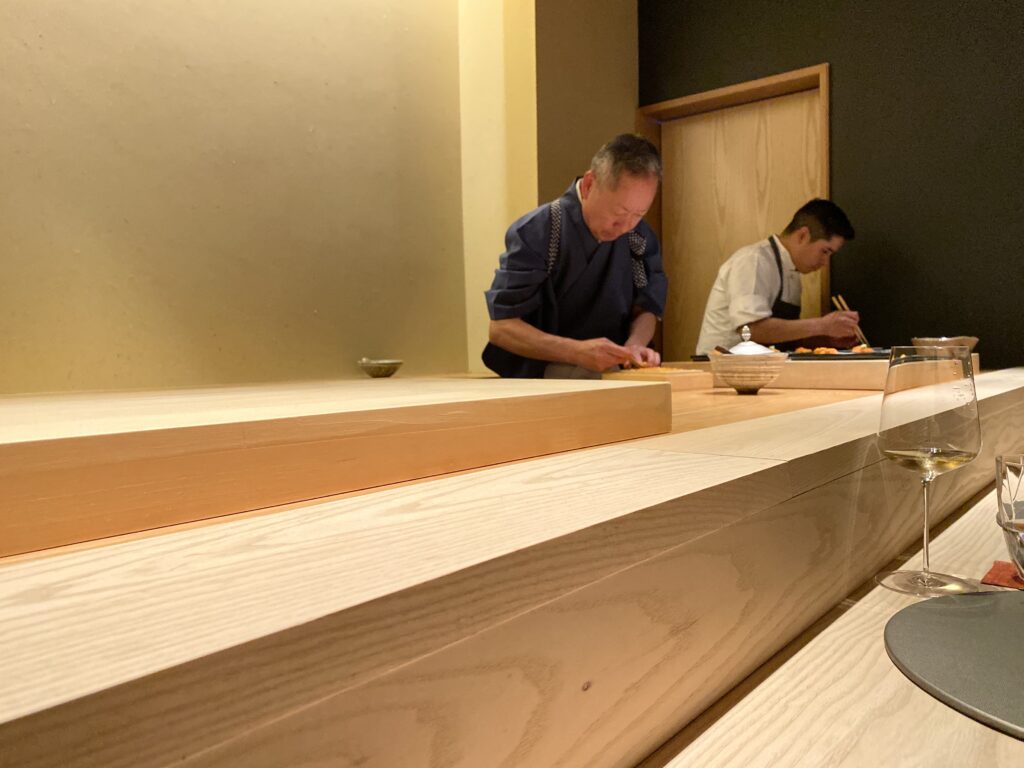 It’s impossible to contextualize a meal at a Ichimura without first understanding the location itself. I’m not sure who first coined the term “sushi temple”, but Ichimura at Uchu is the personification. The room is virtually empty, save for a wooden sushi counter, 8 customers, a quote un quote sous chef and Ichimura himself. I always ask before taking pictures because I’m not an asshole, but even with permission it still felt like I was using my phone in a holy sanctuary. Only the scathing quips from the arguing couple next to me interrupted the venerated experience. 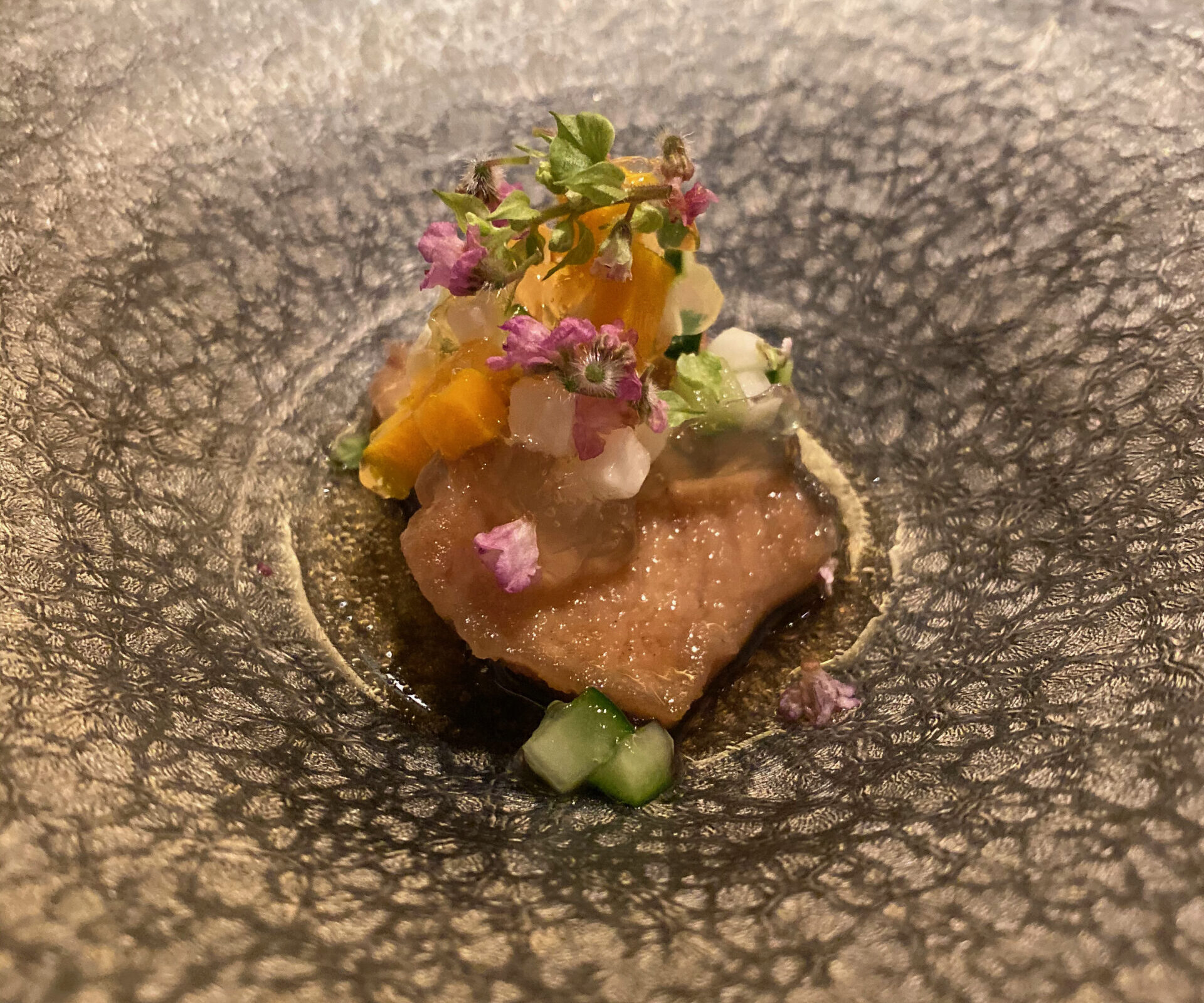 Course 1: Sawara (Spanish Mackerel) with a Dashi and Shiso Jelly

Let’s get this out of the way. Ichimura is a whopping 21 courses of food, beginning – like it does at other jumbo Omakase spots – with mini appetizer courses called tsumami. We were served six, each of which varies day to day.

That variability is because Ichimura, like other uber (dont sue me, Uber) high end sushiya in the city, focuses meticulously on seasonal ingredients, which naturally means a constantly changing menu. So on a Wednesday in December, like when yours truly went pre-pandemic, you may get started with an in-season Sawara from northern Japan, served in a Dashi with a shiso jelly. 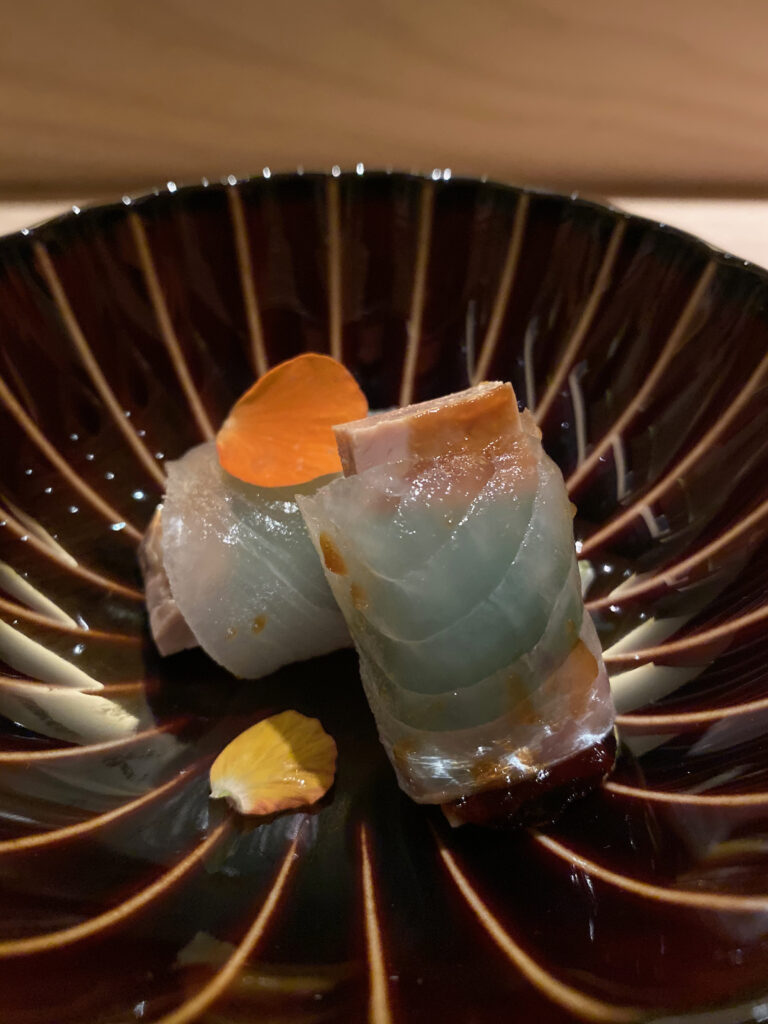 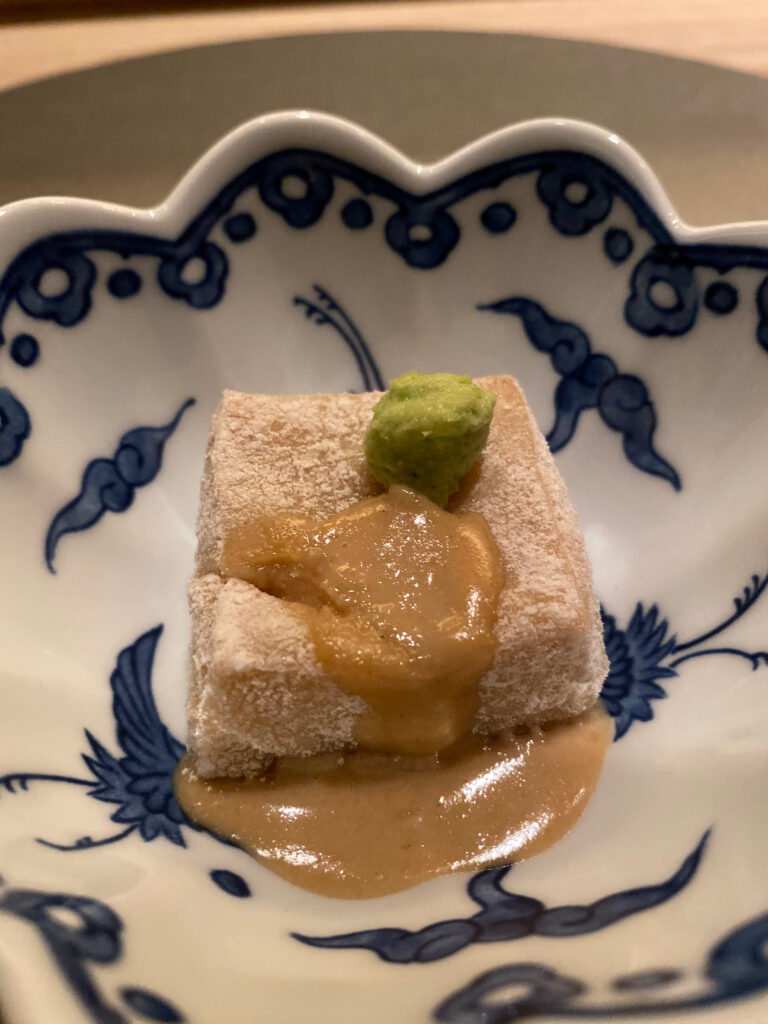 The Uni cracker also deserves a mention, not because it looks fantastic (it does), but because it actually felt out of place. Combining premium, strong-tasting ingredients like Hokkaido Uni and Keluga Caviar (a farmed, inferior version to Beluga) is a move you’ve seen 1000 times before. It’s a cheap trick to overpower The mochi cracker is a unique touch sure, but it’s an awkward eat. Ichimura encourages it in one bite, which a quick glance around at other customers told me was improbable. 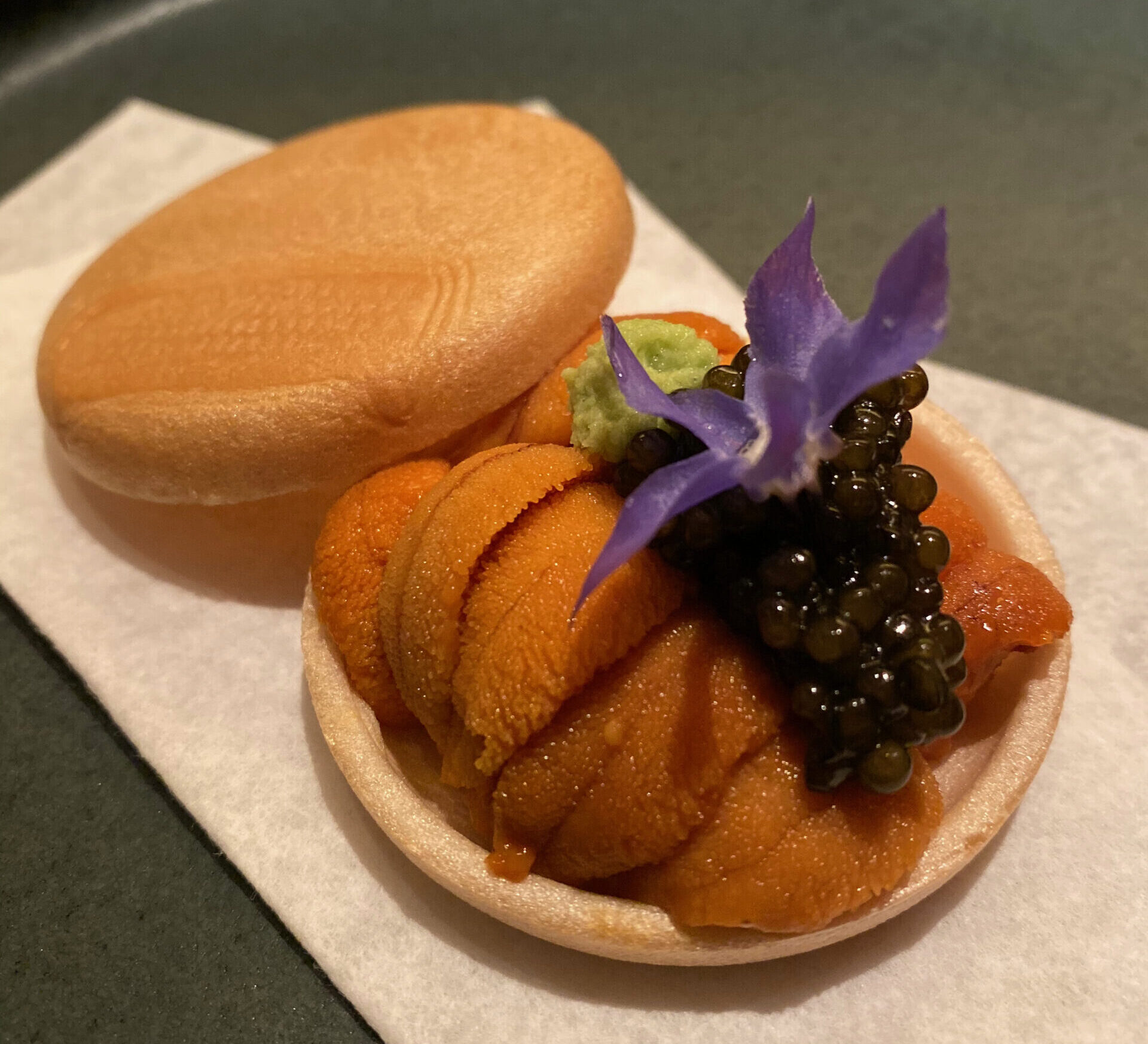 Course 4: Bafun Uni with a mix of caviar (kaluga), wasabi and a flower. Mochi cracker (rice).

That first world discomfort barely had registered before Ichimura-san placed a plate of kan-buri right in my grill. Remember how Ichimura is a bastion of seasonality? It doesn’t get any more seasonal than Winter Adult Yellowtail. 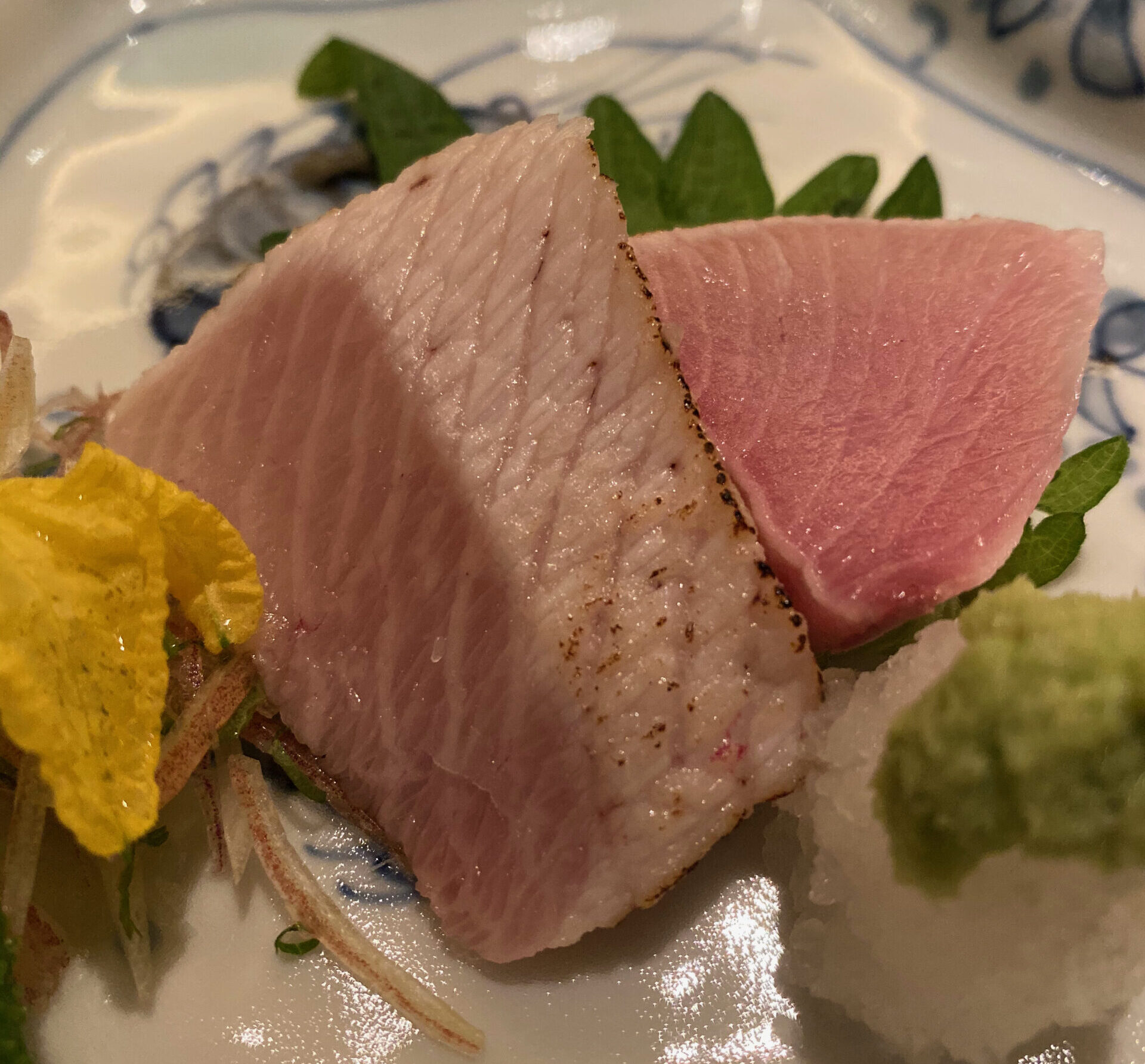 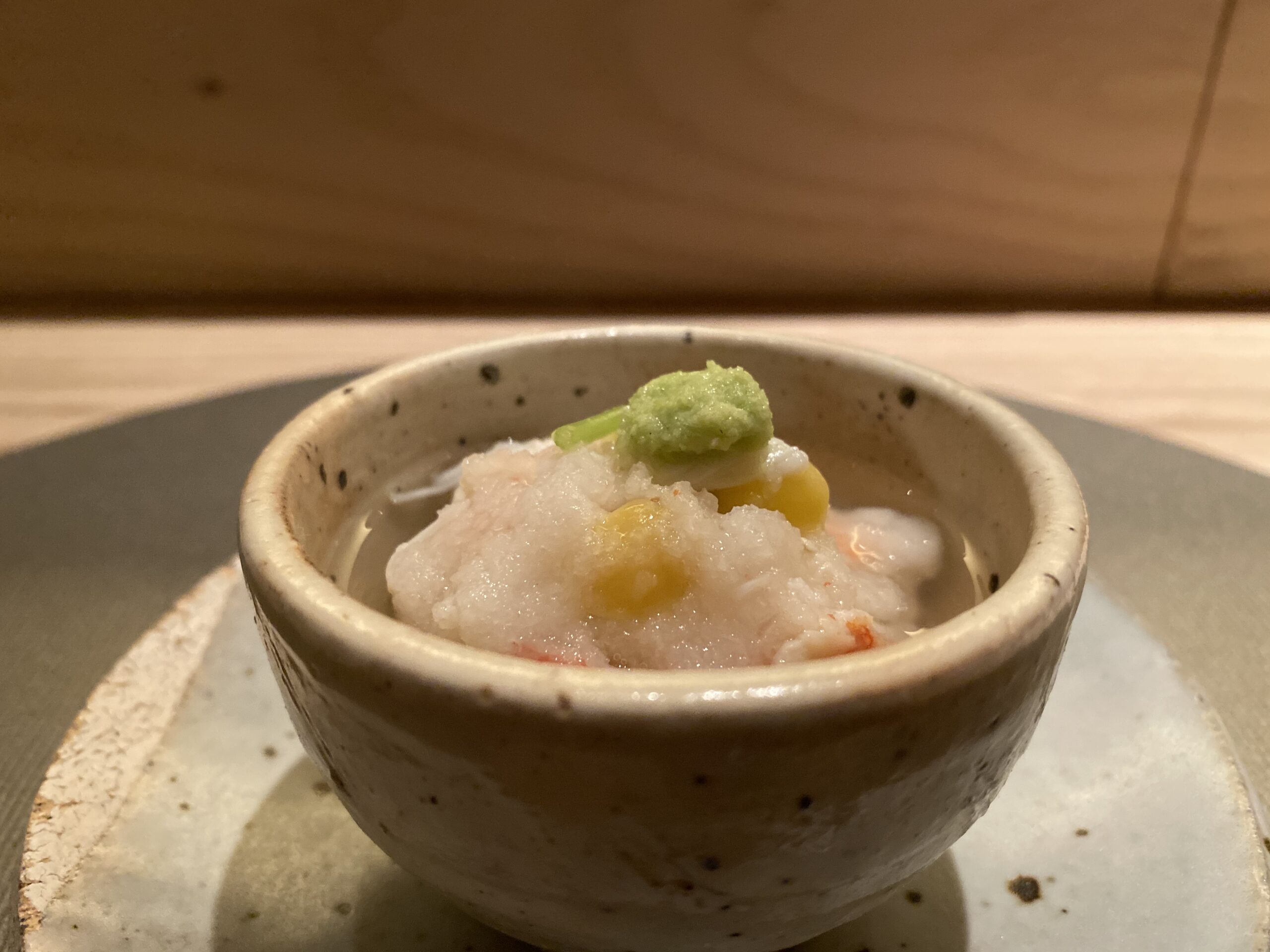 When I rank my happy moments from December 2019, seeing Kinki and Kisu on a New York City sushi menu ranks just below Uncut Gems and about a billion spots above that horrific Star Wars movie. Kisu is typically an early summer neta (topping), but it can be served in winter too; just be prepared for a leaner taste. 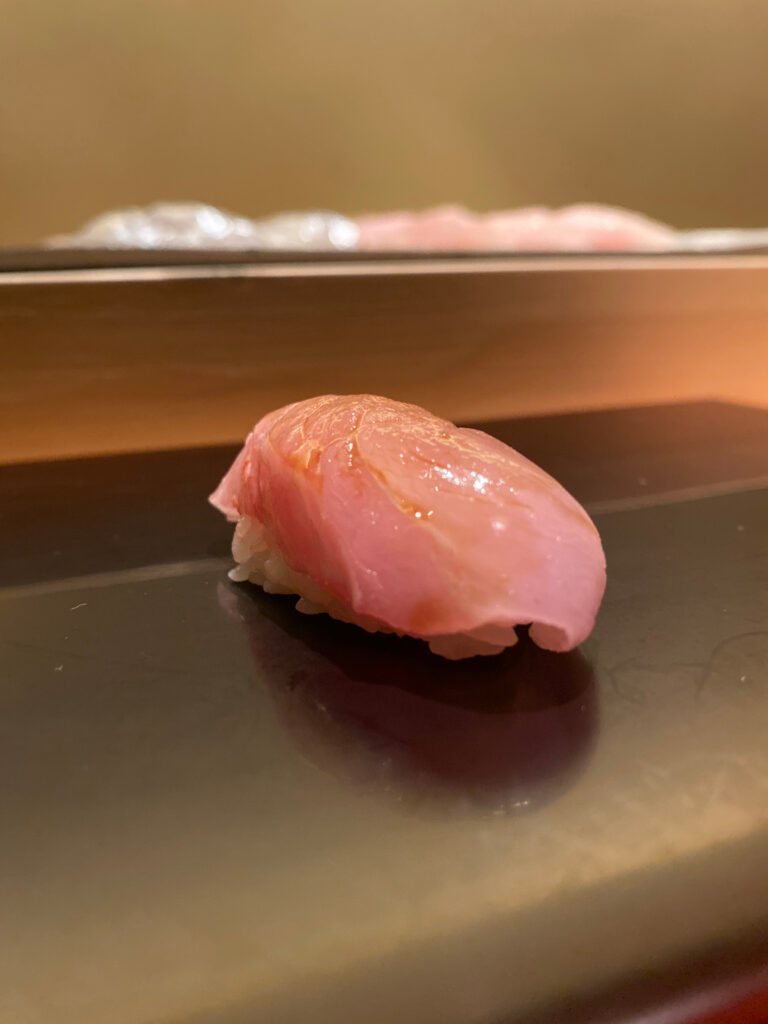 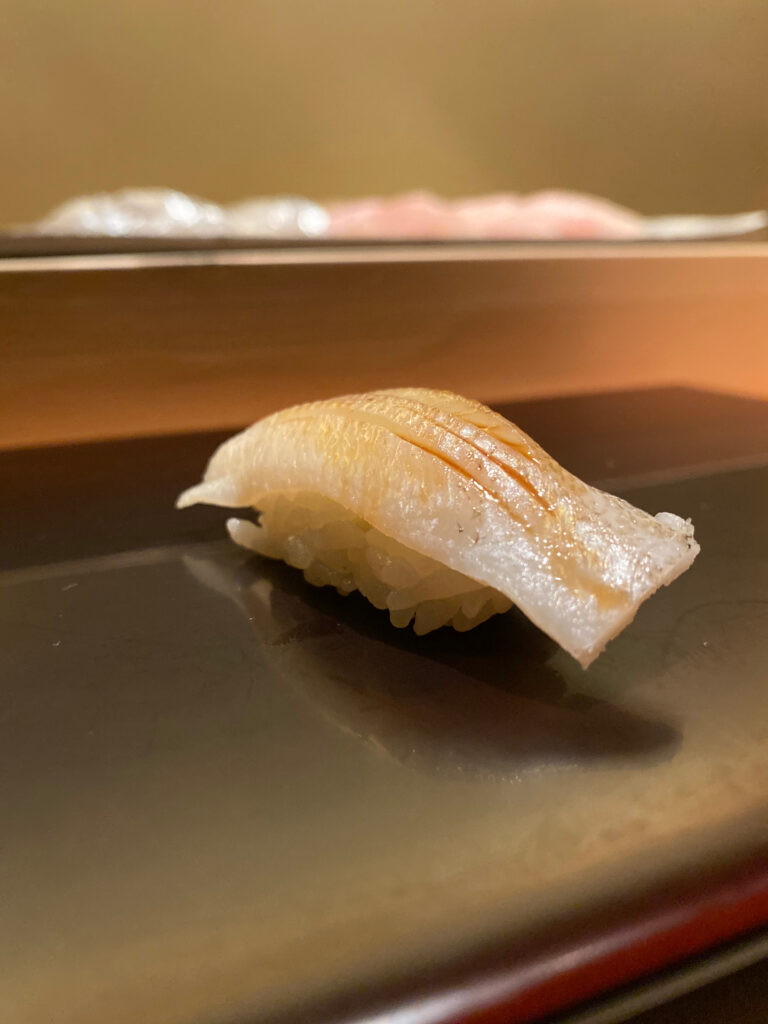 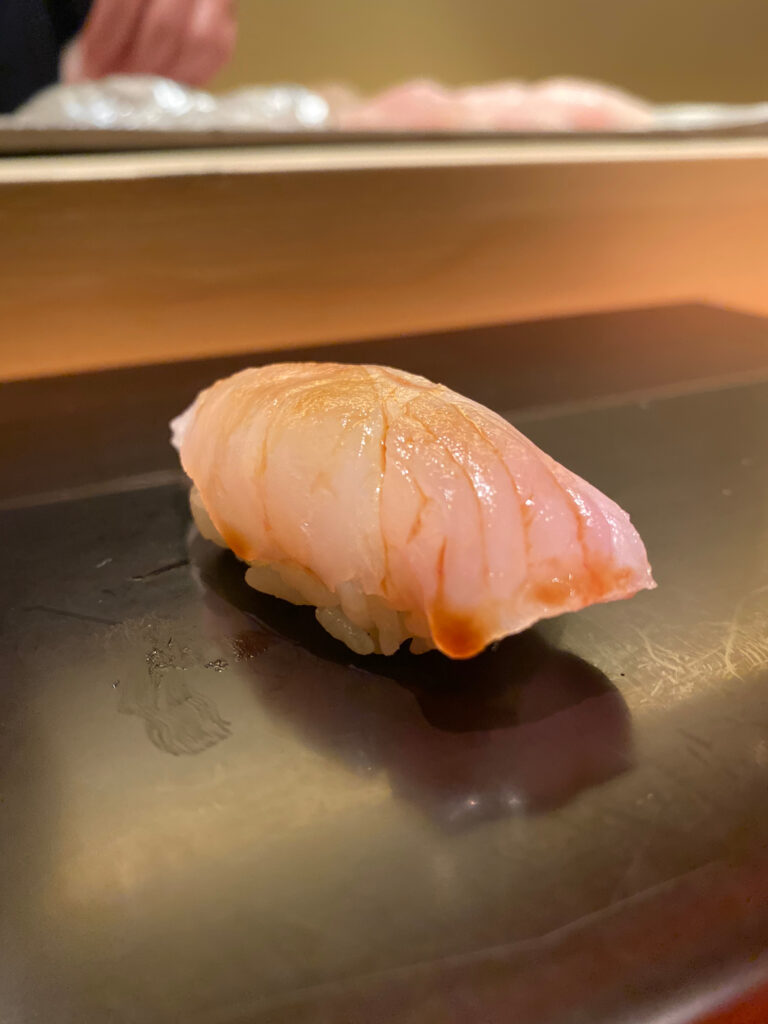 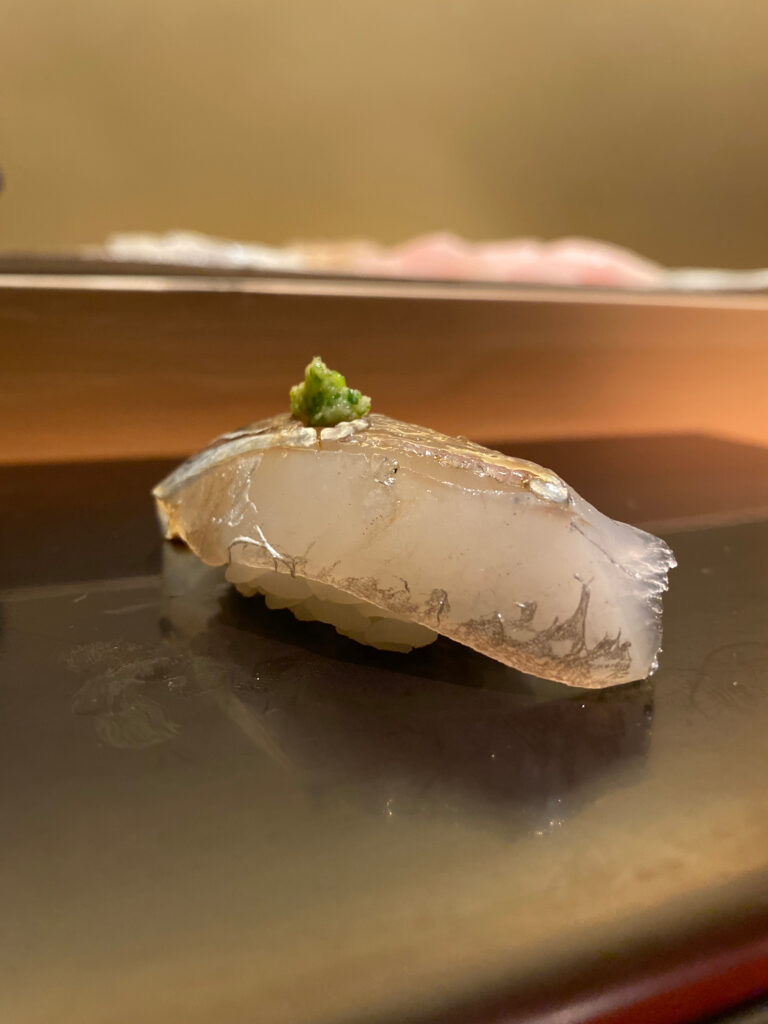 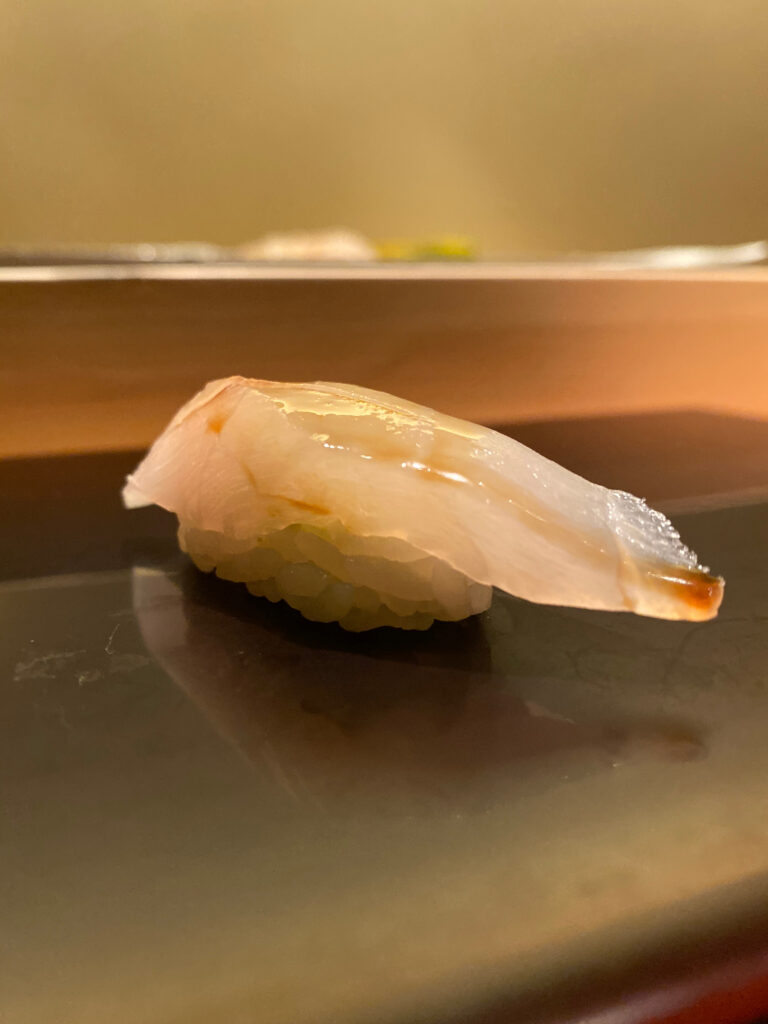 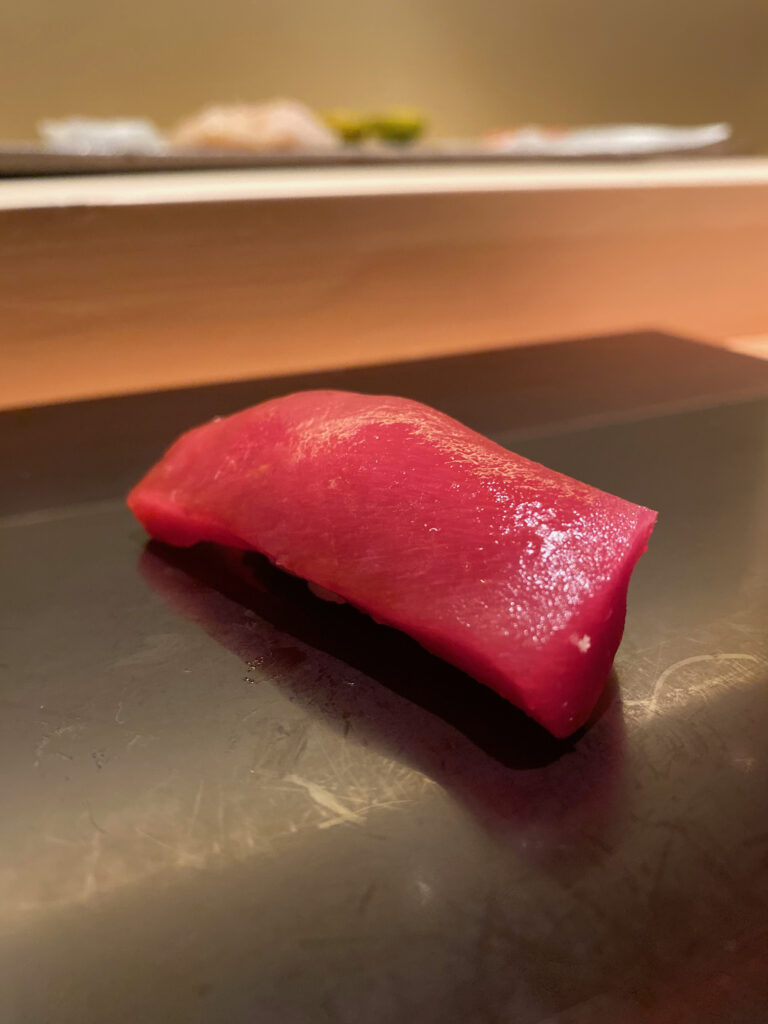 While Ichimura-San is focused and silent as he works, he will gleefully tell customers about the intricacies of certain nigiri. To wit, the Aori-Ika below was aged 5 days with shiso leaf, a technique which helped to surface the taste of a Neta that is often confused for being bland. The Kuruma-ebi? Imported from Kagoshima, the largest city on Japan’s Kyushu island. 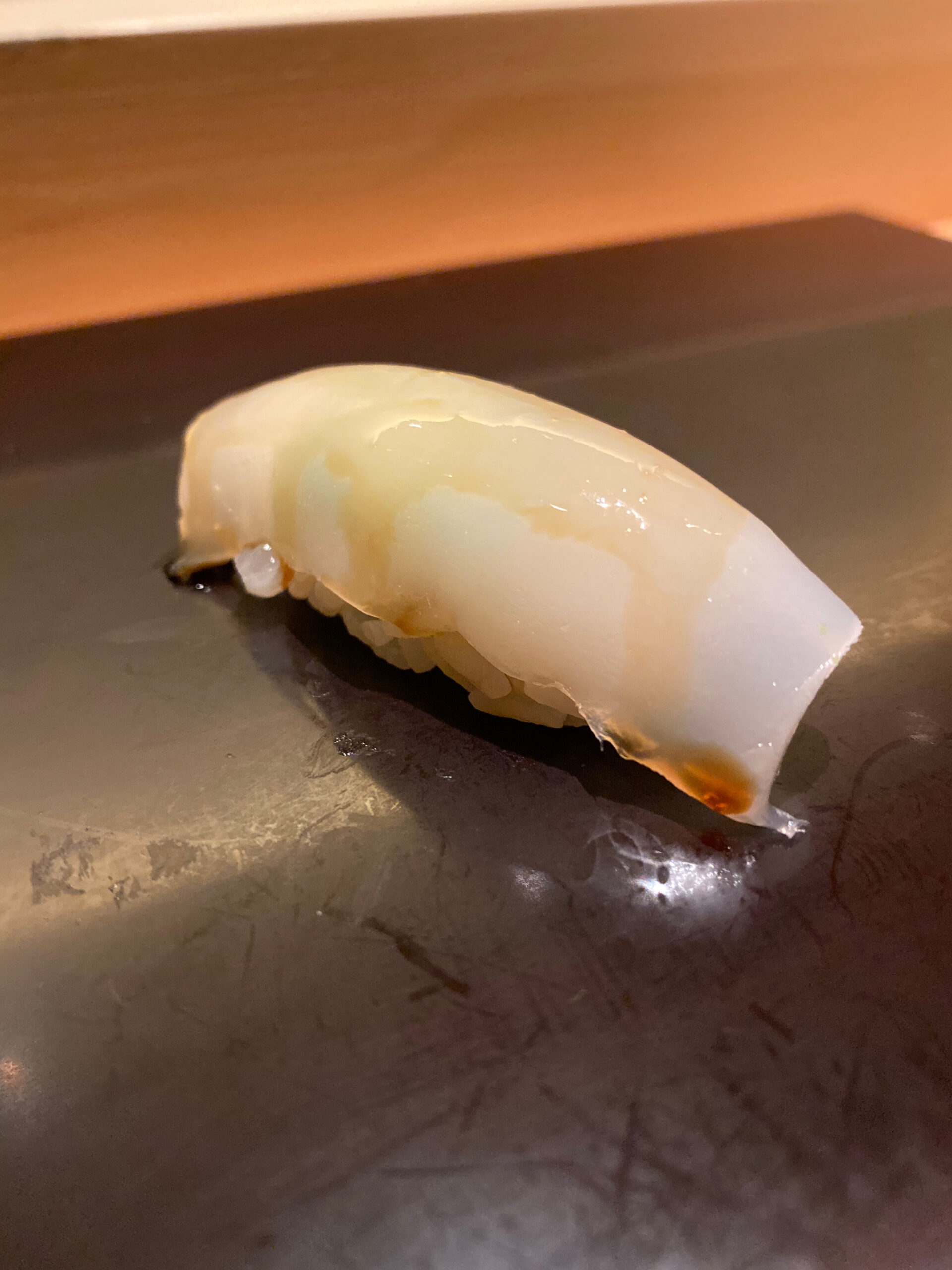 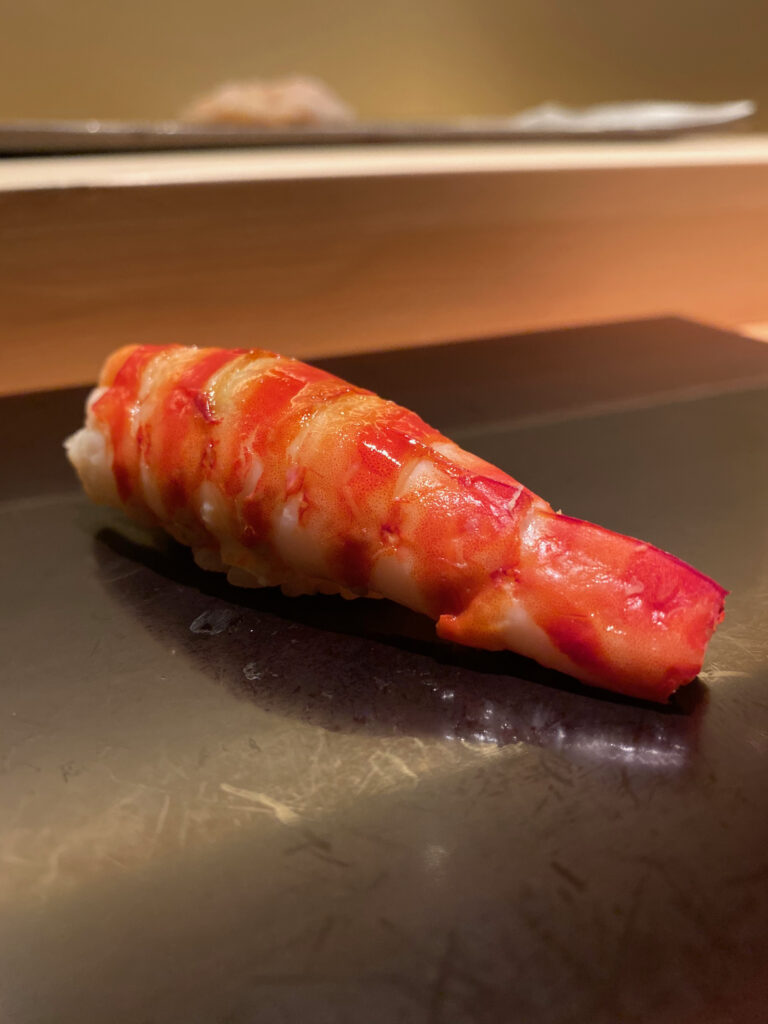 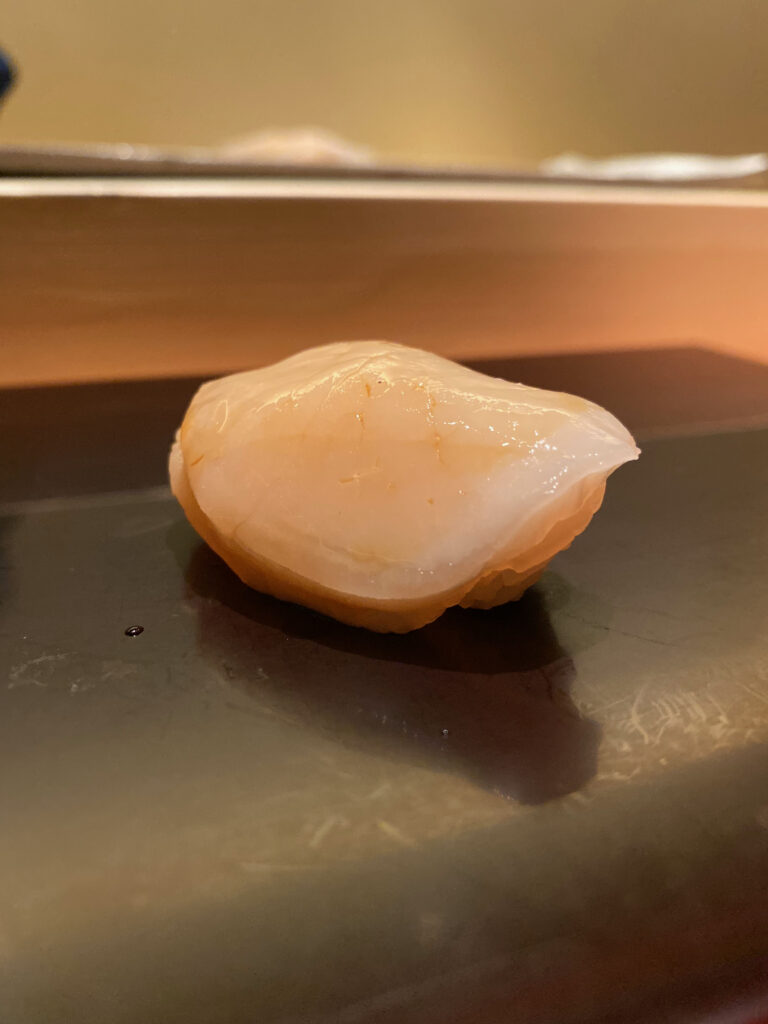 For the 14 of you who still watch professional golf, the next three courses of our meal were the sushi equivalent to reaching Amen Corner at Augusta National. First, Chu-Toro, double stacked. If you checked out my review from Ichimura at Brushstroke, you’ll recognize this beauty. Ichimura didn’t invent tuna stacking – as if anyone really could – but he’s certainly well known for it in New York City. 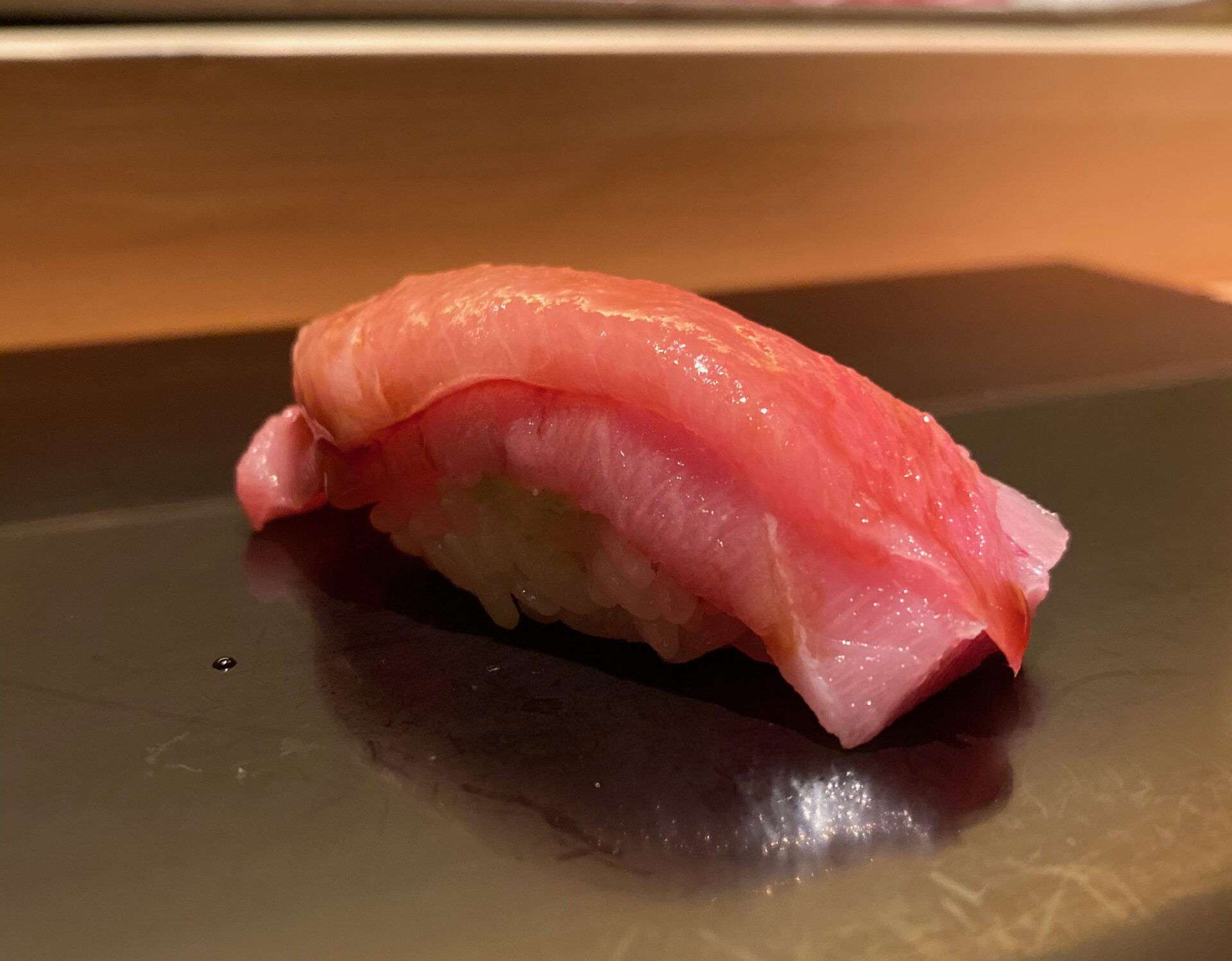 The Uni course was next, and fuck, was it both delicious and weird all at once. That’s because all 8 of us were offered a second piece of uni nigiri, and two jamokes actually turned it down. I don’t want to overreact here, but if you’re you’re spending $300 for an Omakase and tap out at one piece of Uni, you should be jailed. 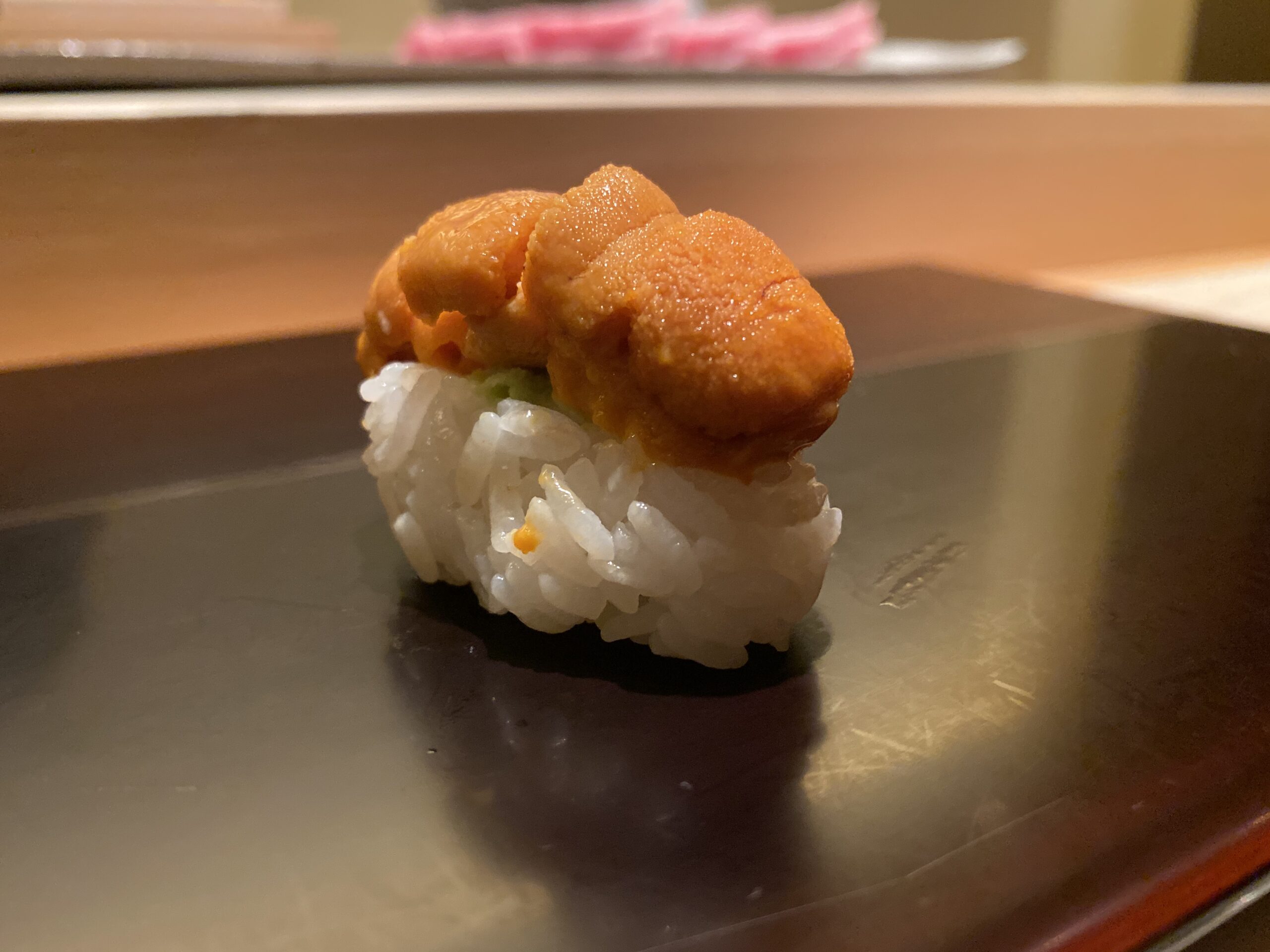 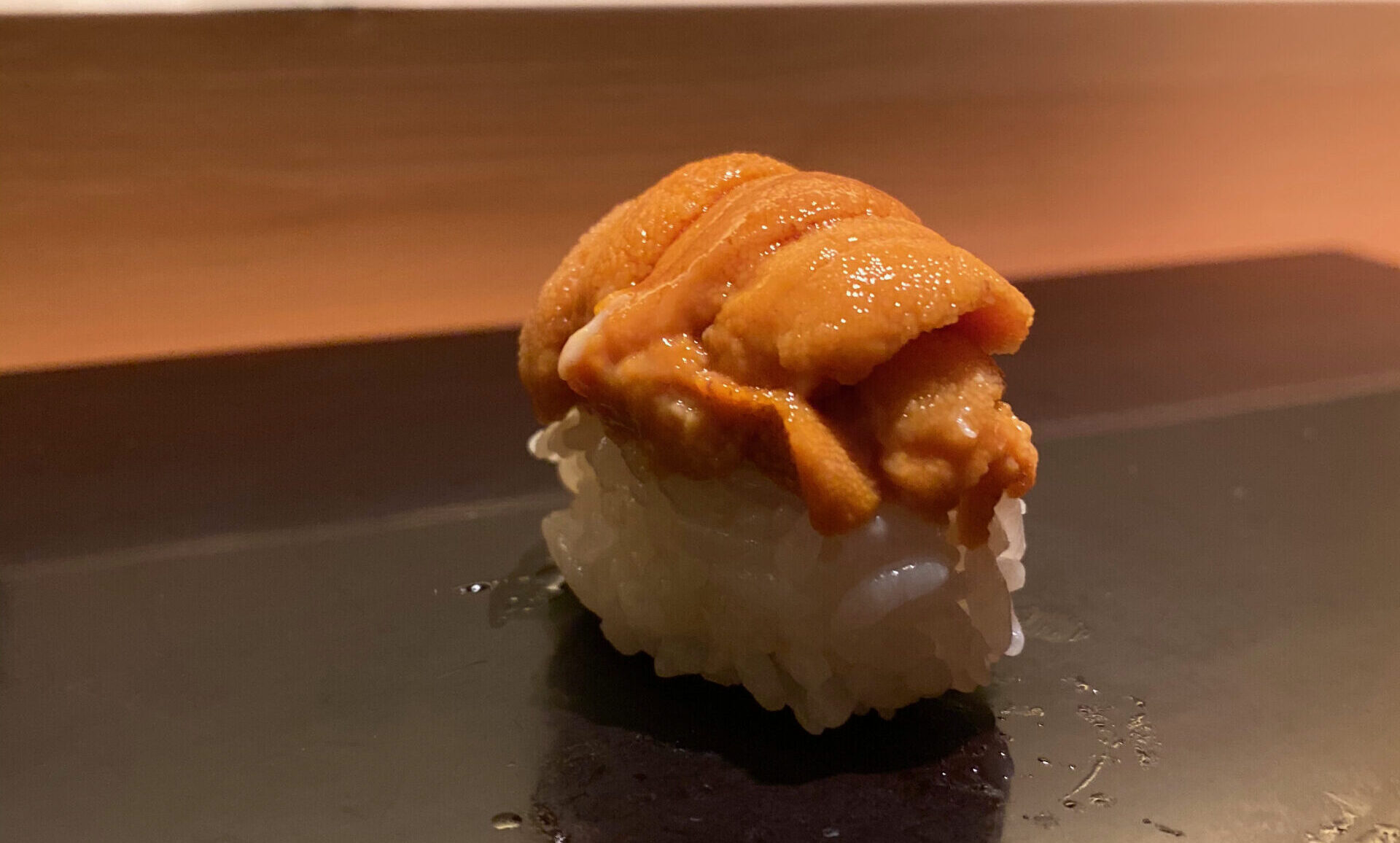 *Canadian reference alert* If the double-stacked Chu Toro is Ichimura’s Fully Completely, then the triple-stacked O Toro is his Day for Night. Or maybe it’s his Up to Here? RIP Gord. Regardless of which of album from the discography of legendary rock band Tragically Hip you pick, the bottom line is this:

no one is mistaking that heft of fatty goodness for some beacon of traditional Edomae. In fact, it’s a decent forearm exercise to just pick this 2 lb monster up without it collapsing.

But of course it’s delicious, and there’s something to be said for seeing a band play the hits. Finishing the meal with the Triple O Toro is like watching Bon Jovi play Livin on a Prayer, but then actually getting to eat it. 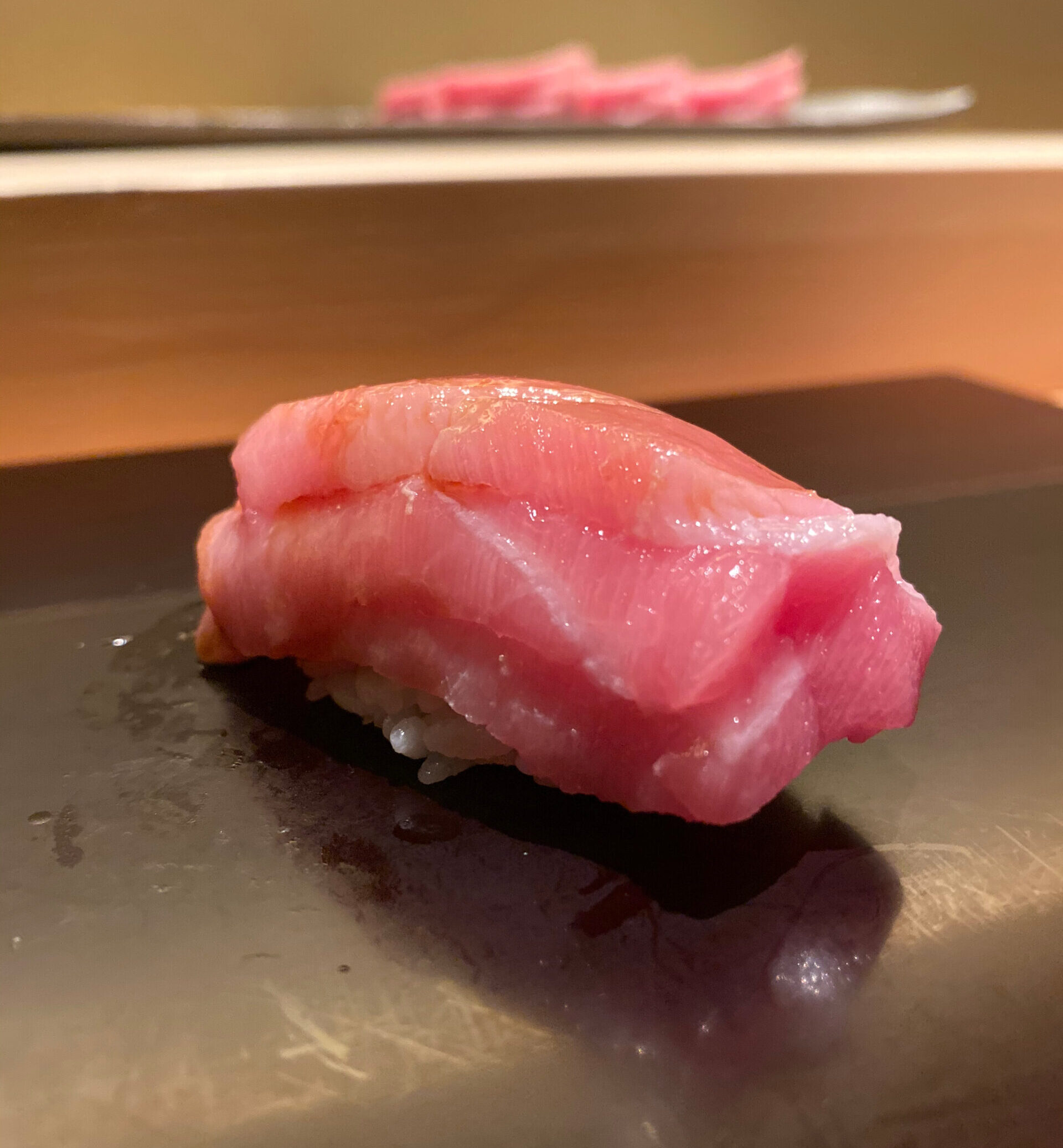 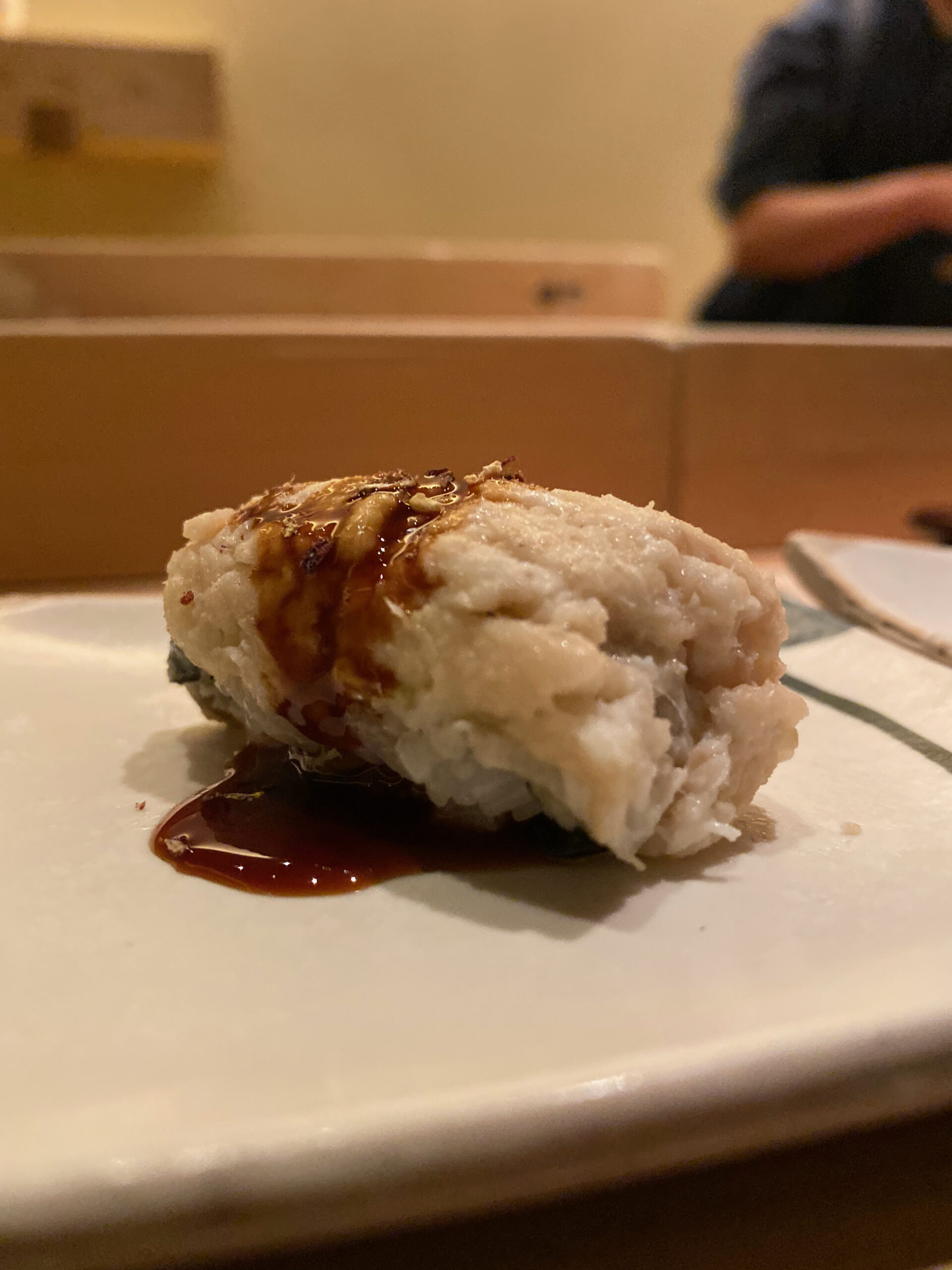 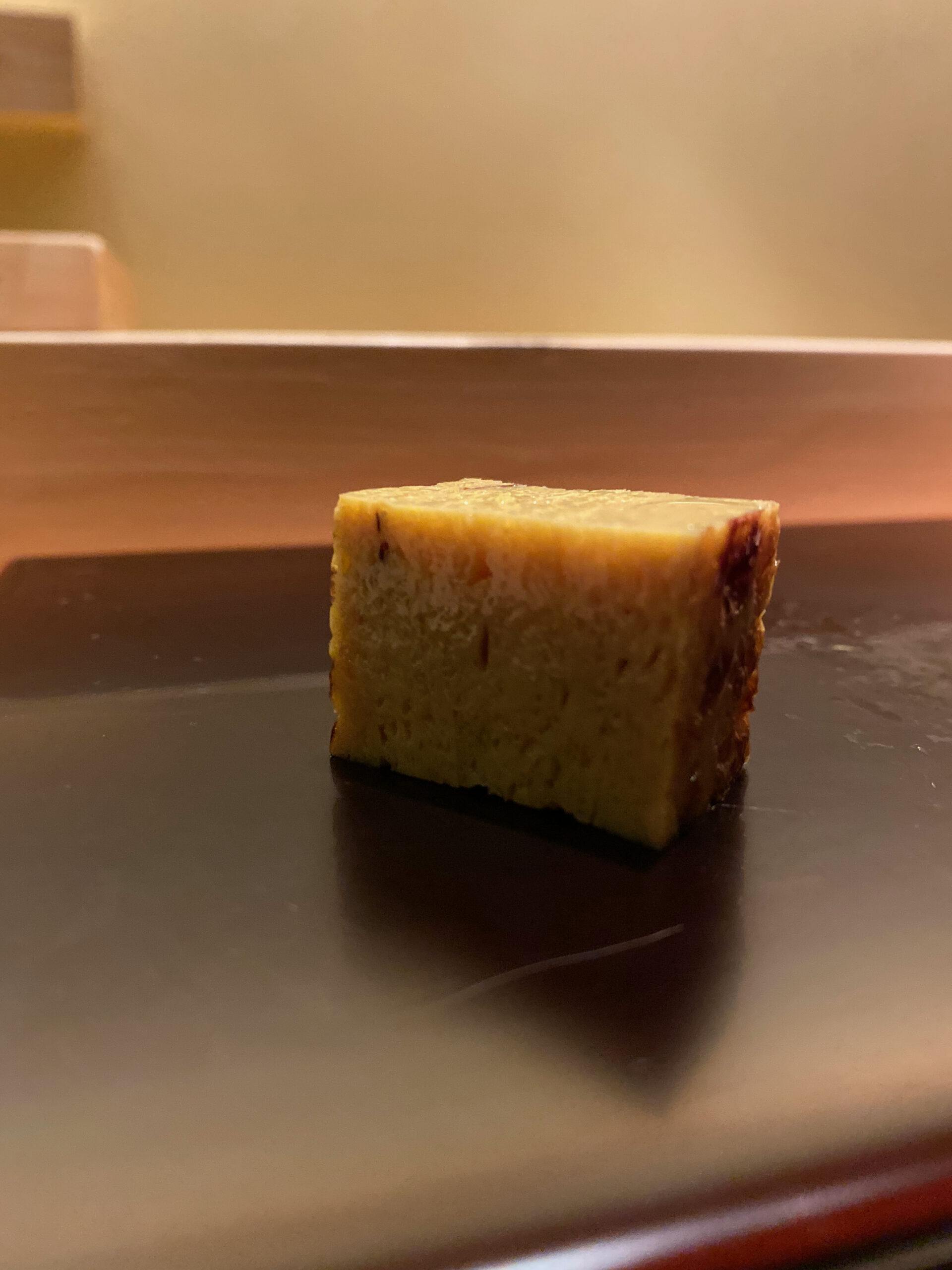 As of November 2020, I’m told Ichimura has no plans to open until at least 2021. That’s a shame, but not entirely surprising; New York City’s indoor dining rules are consistently changing and pivoting to takeout/outdoor dining is a complete 180 for a restaurant like Ichimura. For now, just keep it in your back pocket.