Toronto has the reasonable omakase sushiya that it deserves

For those that have never been, not only is Toronto a beautiful city, but it’s a very multicultural one as well. Part of that multiculturalism obviously means a very strong Japanese population. Another relevant piece of information? The city is large – and full of foodies. For those reasons, it has always surprised me how few high-end sushi options there are in what is known by locals as the T-dot. There is Sushi Kaji, one of my highest rated sushi restaurants – and that’s pretty much it. Compared to New York City, where premium sushi joins seemingly appear overnight on every corner, and you can see why I felt that the fourth largest metropolitan area in North America was under-served. Enter Yasu, an “omakase only” sushi restaurant in the Bathurst and Harbord area just northwest of downtown Toronto. Predictably, it has quickly taken the city by storm, with reservations being fully very hard to come by (they are accepted – and usually fully made – a month in advance). The restaurant itself looks the part. Unlike another restaurant I reviewed (Shuko), Yasu is classy and understated, with plenty of room for the 12 seats at the L-shaped sushi bar (pic in the top right). The food ​is incredibly impressive. I’ve put plenty of pictures up on this review, but let’s be clear here about a few things: There were 18 courses of sushi, 20 courses in total The fish was sourced from all over the world, including Japan, Chile and Spain Everything was delicious This meal cost $80 Seriously – a delicious omakase with fish from around the world, and it cost $80. Sure that’s a lot to pay for a meal, but when you compare it to the minimum $150 that a similar meal in New York City, Chicago – even Seattle – might cost, it becomes incredibly great value. All of that would be moot if it the food didn’t deliver, but fortunately it does. To the right you’ll see one of the meal highlights, which was – not joking here – cod sperm (Shirako). Smartly, the nice sushi chefs don’t tell customers what it is until after they are done trying it. Other highlights include the layered Ikura (pictured above right), and the O-Toro, which garnered my highest “like” total on Instagram for any picture in 2014 (if that means anything at all). The Atmosphere is exactly what I personally prefer from any sushi restaurant. Clean, reserved, classy and relaxed. The sushi chefs are personable and eager to interact, as are the staff who are omnipresent. If I had to nitpick, the drink orders were slow in being taken, and the drinks themselves were slow to come out. Once the meal settled in though, it went smoothly, and the 2.5 hour meal time went as quickly as one could hope. What makes Yasu stand out are the little things. When I go to any restaurant, I want to feel like they got this. That they know what they’re doing. And that’s a sentiment that I’m sure I can’t be alone in thinking. At Yasu – they know what they’re doing. For instance, when we had the Scorpion fish (Kasago- pictured right), a server came around with an IPad to show pictures of what the fish looks like in the wild. Even better is what Yasu does at the end of the omakase. Why give customers an a la carte menu, when they can literally pass around an a la carte plate showing all the fish available for order. The cherry on top is that none of the “a la plate” options had been served during the omakase meal. Nice touch. So what keeps Yasu from being at the very top of my rankings? The rice isn’t perfect. That said, Yasu itself is close and deserves a visit for anyone who likes sushi and is in Toronto. ​Recommended. 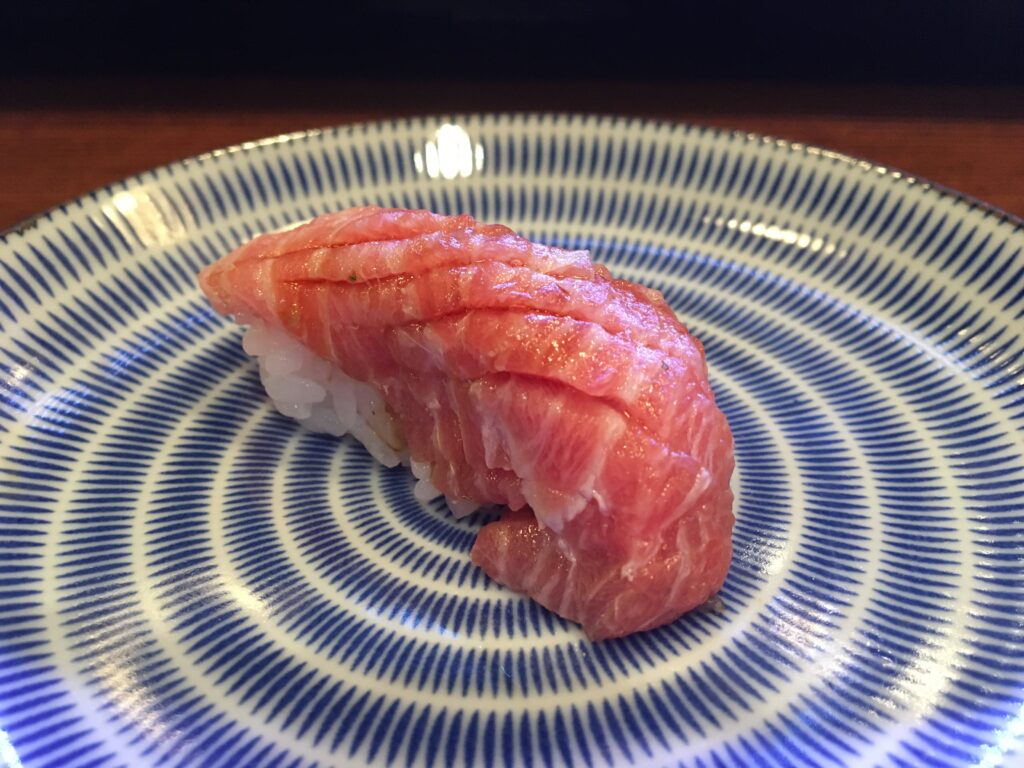